In the previous blog I linked to another blogger, who discovered that Astra Zeneca had employed V-Fluence, a company headed by Jim Bryne - ex spin-meister for Monsanto, to spy on him. and others.  He describing what he saw, with screenshots. He also posted a list of people who then read the blog line like Astra, Pfizer, WHO and other drug companies.  No surprises really.  His next blog goes further, detailing how v-Fluence is now whining that he "hacked" their data-base.

Which is pretty funny really.  When caught out for being serially mentally deficient in covering you non-PR tracks, find an excuse and whine!  Let's not discuss the fact that you're actually snooping in every possible way, either lawfully or otherwise yourself!

Clicking on a page which lets you open it, isn't hacking.  Oh, yes, and the blogger suggested that if you wanted to know more about Jim Byrne, the head of v-Influence, you should go to this spinprofiles page: http://spinprofiles.org/index.php/Jay_Byrne Which is now redirected back to the main page and you can't see it. Understandable really.  This sort of lapse can lose a snooping company, business.  (I pdf'd the Google cache page on Jim Byrne, before v-Influence or AZ think to pass mega-bucks under the table to persuade Google to nuke the cache page.)

Those of us treading hot bricks for the last few decades, realize we are being watched. Maybe we didn't realise it at first, but sometimes you find out.  This is how it panned out for me.

It was the early 90's and it never really occurred to me that what I was doing was of interest to anyone else.  I naievly didn't know how to spell the word conspiracy.  Actually, there is no such thing as conspiracy.  The actions taken against us are reality, and we are all well aware of them. The only people who talk about conspiracist nutters, are those who want others to believe that we've lost the plot, and are mentally deranged. Once you're in a position of advocacy, your perception of "reality" changes. You realized that in the past, you lived in a fool's paradise.  But like I say, I was just puddling along being me, when I got this phone call from Australia. The conversation went something like this:

"Hello, is that Hilary?"

"Lord High Poo Bah, acting on behalf of Dr Up. To. Nogood."

"We thought you should know that we actioned an enquiry onto Dr Nogood's phone, and we need to let you know that your phone is tapped."

"Hmm.... which means that tap has been started right now, and is recording?"

"Precisely, and we are recording this now as well."

He repeated his name, the firm they worked for, and the first part of the telephone call, and I hung up, gobsmacked.  Actually, I simply laughed for days.  I talked to my husband about it, and he looked thoughtful, and then said, "Oh, so that's why it's only on certain calls you hear a click?!!! Hm, and I thought that it was a bad line."

The clicks stopped that day, for over a year, and then they started again.  So I went to a friend of mine, who I thought was somewhat intelligent, who worked in Telecom, and asked them to find out if there was a tap on my line.  I explained that if there was, I wanted to put an OIA enquiry and request a reason as to why.  There was a tap on it which was not word triggered, but just tapped period..., but unfortunately the person I asked, rang me to tell me that there was.  Duh.

Since that time I've just assumed that our phone will be tapped as and when "whoever" has their tits in a wad, chooses. I really don't give a flying fart.

So it's a given that websites and blogs will be watched, no matter the topic.  And it stands to reason that it will be big business that does the watching.  Does big business have scruples? Sometimes.  Mainly when it suits. But we can't assume so.  When truth comes too close to home, questions of privacy and legality will often fly out the window.

Anyone who is an activist, who is passionate about something which treads on someone else's toes, should expect that from the point they first open their mouths, big business and politicians will have them under surveillance.

Not just on vaccine or drug issues either.  At the Mining March in Auckland yesterday, you can be sure that plain clothed infiltrators will have been secretly filming many participants, and that this little sign will have been noted carefully.  After all it carries the face of the man who is the driving force behind the Super city, as well as the move to mine key areas of New Zealand, and who has shares in the very mining companies likely to do future mining. 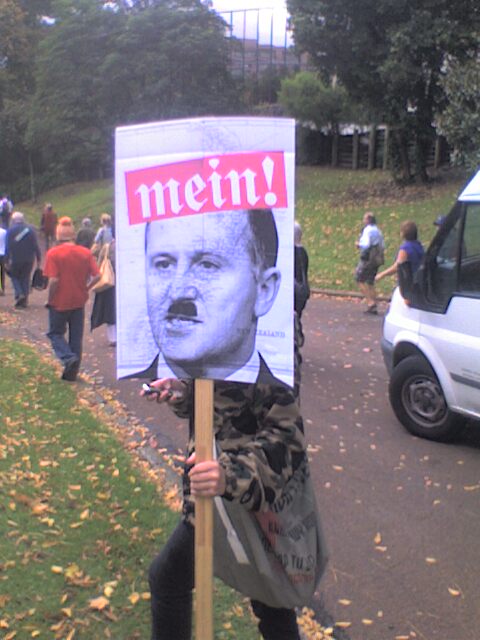 A man smart enough to delegate the portfolios of the Super city and Mining to someone else, so that come a certain point, his lackeys can take the can, not him, .... but his newfound riches will be "mine"!

At the expense of the taxpayer, of course....