Yesterday,  the Herald interviewed me about the Australian law which now financially penalises parents who choose not to vaccinate their children, for today's article called "Key rules out 'no jab, no pay' policy" and these were my notes of the questions asked, and my answers.  This is not a transcript, so the wording here may now be more condensed than a telephone conversation. Which is actually why I prefer to answer journalists via email, because then I have an exact record.

1) What did I think of Tony Abbot's decision to financially penalise parents who didn't vaccinate their children?


Answer. He's a hypocrite. He didn't vaccinate his three daughters against Gardasil, and publicly said so, so why penalise other parents for choosing the way he did?


2) John Key has said that because we have a very high vaccination rate, he won't follow suit. What is your response?


Answer: How can I trust him? He has a history of saying one thing and changing his mind. Besides which since New Zealand has the highest rate of vaccination that we have ever had ... why would you suddenly be making criminals of children who aren't vaccinated?

3) But doesn't Tony Abbot have a point - that it's not a person issue, but a public health issue?


Answer. No, actually, there is total hypocrisy there. When any of you journalists go to Kenya to cover a presidential election or an Isis attack, you are recommended to get certain vaccines because the people there are walking around, seemingly healthy, carrying endemic diseases which supposedly will kill you (and not them) so you get the vaccines on the assumption that those vaccines will protect you when you are dumped into a cesspit of disease. You go there with impunity, thinking that you will be protected right?

So why, when you come home to New Zealand and one case of measles pops up, do you suddenly have the pro-vaccine trolls all over Facebook saying that measles case is about to kill off the vaccinated majority?

4) But isn't the point to protect the immunocompromised people?


Yes, that's the argument they use now. However, it's a fallacious argument. Part of the drive in Australia was hyped up by a woman who owned a day-care centre where she made a living off looking after toddlers. She also had a son with leukaemia, who had been treated with chemotherapy and couldn't go to school because his immune system was chemically nuked. So she took him to her child-care centre to look after him, rather than stay at home with him. A child in the day-care centre arrived with chicken-pox, and she wrote this article about how these children should be banned.

Actually her own child should NEVER have been in her day-care at all, because anyone with a brain who has read the medical literature knows that toddlers in day-care have a very high rate of infections, BECAUSE they are in day care.

(Hilary, I did not say this. it's for readers: Furthermore, chickenpox spreads fomites which can easily be transmitted by vaccinated people back to sick people and whooping cough is carried and spread by vaccinated people. Also people with cancer are recommended to stay away from anyone who has had a live vaccine, for at least a month )

Immunocompromised children can catch ANY infection, and ANY infection can be fatal, even a simple cold. That mother didn't even consider all the normal things that toddlers come into day-care centre with. That in itself is astonishing. All she did was hit out at unvaccinated children, support their banning and ignore the fact that if her son couldn't go to school for that reason, her son shouldn't have been at her day care either.

Why is it that perfectly healthy unvaccinated children who are not even carrying disease are ostracised, so that a chemically coshed child with no immune system can live a normal life in society which is always carrying and passing around a whole lot of bugs completely unrelated to vaccines?

Again, the hypocrisy is astounding.

P.S.  For readers .....How do I know Tony Abbot didn't vaccinate his daughters against Gardasil? 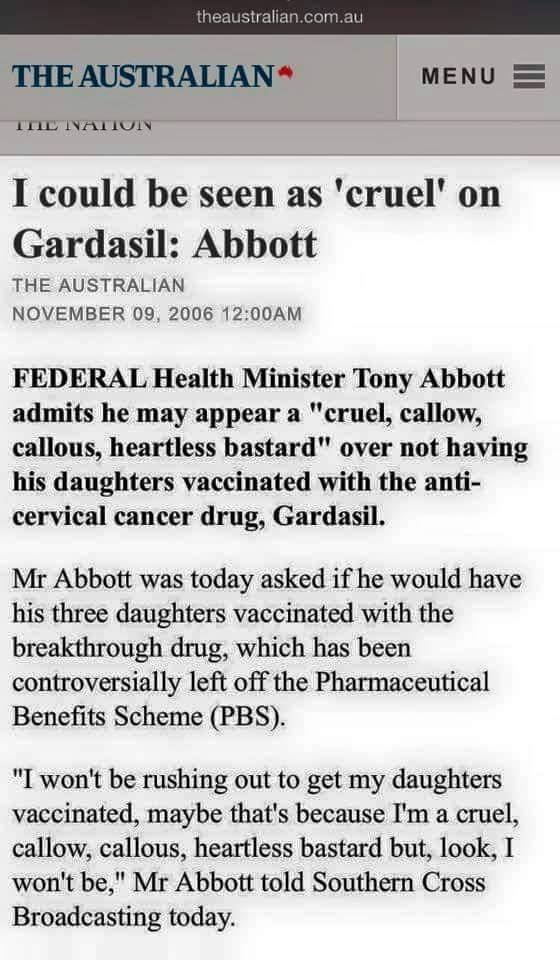 So it's allowable for Tony Abbott to make a choice, but he's not going to allow others the same freedom.