In today’s Herald on Sunday was an article about Waitetuna school near Raglan, where the school principal agreed to allow a midwife to show a film about the other side of vaccines on the school premises, but the board of Trustees overturned her agreement, on the basis that the topic was controversial.

I have a question. What are schools for?

Education, or social engineering? George Orwell wrote a book called “Animal Farm” Have you read it?

If a parent from Waitetuna school objected to nurses and doctors coming into the school and vaccinating children, would the Board of Trustees agree and stop them coming in because vaccines are controversial?

I somehow doubt it.

But I want to tell you a story of a young child, in a school, who along with some other children, returned a consent form for the HPV vaccine, which said, “No, I do not consent”.

What happened next will illustrate that New Zealand schools are not safe for children, and why the Department of Health vaccination programmes should be barred from schools.

The forms were collected and all the children who had returned “no” consent forms, were gathered in a separate group and the nurses berated the girls telling them that their parents didn’t love them, and that they could consent on their own, without their parent’s permission. One of the girls caved to that, but then another child who had watched the life of an older sibling be trashed and lead to a quality of life less than desirable, fought back. She refused to sign it. The nurses pushed. But she got angry and told the nurse that she wanted to go now. The nurse refused.  The girl then told the vaccinating nurse that she wanted to call her parents and the police because what they were doing was wrong. Nothing like the experience of your own eyes, to firm up your own convictions!

At this point, she was quickly hustled out of the room in order not to freak out the other girls being pressured into going against their parent’s wishes.

How did all this situation come about?

The Department of Health, with school consent, seems to have started using the tactic of not telling the schools when they are coming to vaccinate. Their ostensible reason for this, is so that the children don’t get worried in advance.

What a load of bollocks.

The real reason is so that the parents of the non-vaccinators can’t keep their children home for that day, which allows the provaccine including the nurses, teachers and other pupils, to bully and berate children whose parents have chosen differently.

So while parents who don’t consent, would rather not send their children to school on that day, the Department of Health deliberately thwarts that option. This could be called revoking democratic decision making.

Of course in this mind-numbed unethical climate of bullying, emotional blackmail and … yes … controversy, such tactics are considered to be noble, wonderful and lifesaving.

Vaccinations ARE indeed a controversial topic of discussion.  I believe that if schools refuse to allow parents to watch a film at a school, describing another side of vaccination, then schools should ALSO refuse to allow the Department of Health to vaccinate children in schools.

The issue isn’t just “controversy”. It’s one of non-hypocrisy. What is “education”? How do you define learning? Only by hearing one side of a story?

Do you send your children to school, and allow the Department of Health to vaccinate your children in school because you can’t be bothered making the effort to follow through on your own convictions? Shouldn’t parents who chose to vaccinate, be responsible for doing that at their doctors?

Would you like schools to also become places where children can also be prescribed antibiotics, prescription drugs, or even, abortion on demand?

Or should schools SOLELY be places where people are educated and learn to think, in particular to figure out how to make their own decisions without being brainwashed by the school or the state? 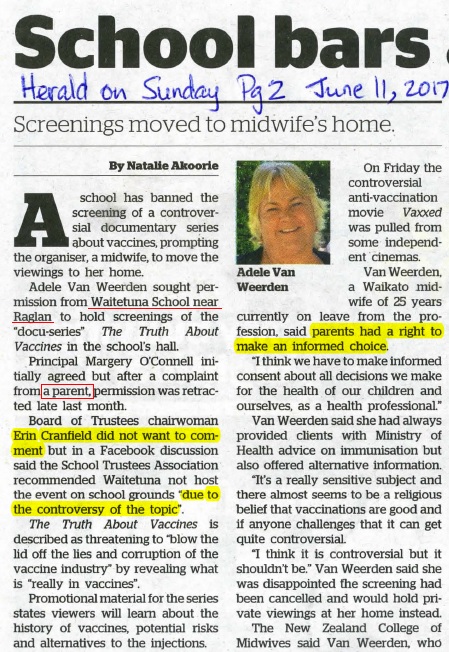